The study suggests a practical use of augmented reality (AR) in supporting Deaf and Hard of Hearing (DHH) students in mainstream schools. The paper presents two case studies. First, we used AR via wearable glasses to support the communication and feedback loop between the instructor and DHH learner during the lesson. Second, we used AR via a typical tablet to support the DHH students in acquiring vocabulary and subsequently, improving their reading-comprehension capabilities. In the first study, although the wearable AR glasses were not stylish enough to be attractive to the DHH adolescent, who felt uncomfortable wearing them in a real classroom setting, she was positive about the potential value of the technology in providing immediate feedback and communication with the educator. In the second study, the experience was positively endorsed by four participating six-graders and their special teacher who thought that AR technology can be a great supporting tool during reading-comprehension of difficult texts. The study demonstrates the utility of AR technology in real world settings, serving the needs of special education students, in this case, those with hearing loss, potentially contributing to more inclusive classroom environments in mainstream schools.

In case of emergency, hearing impaired people are not always able to access emergency services and, hence, they do not have equal access to social support and infrastructure. In this work, we undertake the development and evaluation of a system aiming to meet the communication needs of hearing impaired citizens in cases of emergency. The system consists of (i) a mobile application that records and sends the details of an emergency event, and (ii) a central management system that handles these calls from the operation center at the emergency services. The system was completed in four cycles of design, development and evaluation with the involvement of 74 hearing impaired users and three officers from the Cyprus Police (Emergency Response Unit). 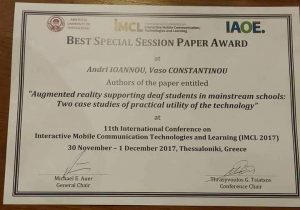